Angels of the Fields Scholarship

Posted on September 5, 2017 by shocpaula

In a trailer, tucked between a Sacramento River levee and Bartlett pear orchards, Gabriela Leon Cerriteno talks about her 19 years of life to date. 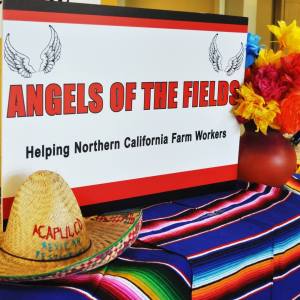 She will embark upon a college career in four days. She’ll drive at least 45 minutes from this spot, her family home, to Cosumnes Community College classes that start at 7:30 a.m. She will work toward her hoped-for degree in psychology. While she would never demean her parents’ professions as farm workers, like so many rural kids, she wants to take a different path.

Her last semester up river at Clarksburg’s Delta High School, she did a project for her English professor and met professionals in the field of psychology. They piqued her interest. “Psychology is so broad, I could use the degree for anything. But I am leaning toward clinical psychology,” she says.

Gabby received a scholarship through Angels of the Fields, a Delta-based volunteer group that helps farmworkers, their relatives and their children with a variety of basic needs—from finding adequate and safe shelter and nutritious food to providing transportation, especially to medical facilities. There are no health clinics in the Delta.

In addition, Angels of the Fields hosts several special events for farmworkers. Their biggest is a free Christmas party with carnival-style game booths, presents for all, a visit with Santa and lots of food. All gift toys and clothing are new items, and are sometimes the only things the kids will receive for the holidays.

Gabby knows the event well. “We always signed up to go there,” she remembers. “In my sophomore year, I started volunteering and worked the carnival. I volunteered for three years, at a booth or handing out snacks.”

Gabby first lived in Locke, an old Chinese community 7 miles down river from their Courtland location. But when the family of two adults and three children grew by one, the house there was too small and they moved. All the children have helped their father in turn with various aspects of trimming trees and harvesting fruit. “December is the season to trim trees, but when I was little my Dad didn’t trust me with the scissors, so I picked up sticks and branches and lined them up for the tractor,” Gabby says. “This last year, I got a job with a local food truck. I worked there from Monday through Saturday, 10 to 6 every day. I don’t like asking my parents for money. Except, they will be feeding me still,” she laughs.

Gabby’s father works for nearby Amistad Ranch where he does irrigation and pruning. She knows a lot of the workers at Amistad because they were so close. “In the summers, we would go for lunch break and hang out, or bring water. We were their little angels. And we helped them out in the winter season too.”

She sees her father now taking on what she calls “double work” because he has had to train to do a lot of new technology. He also is responsible for training others. “Pipes break down. He has to show them how to repair them.” Her mother started working outside the house about four years ago picking fruit. “She goes from place to place. You never know where she’ll be working—with my brother to pick pears, or grapes, kiwis. She picks cherries. We have green tomatoes and avocado trees here. That’s her job at home.

“Sometimes she switches to pear tree pruning. My brother and I would work with the two

of them and we brought my younger brother and sister, just to show them that it was not easy. I used to have longer hair. One day it got stuck in this huge spider web. (She swirls her hands around her head). I said, ‘I’m done.’ I told them: ‘I’ll clean the house. I’ll make it sparkle. I will do my homework, but no more pruning.’ Then, when they were leaving to prune, they would tell me, ‘You do well in school or we’ll take you.’”

Gabby was born a year after her mother came to the United States from Mexico. “I was unexpected. They were not prepared,” she lets on. “I am their experiment here.”

Gabby says she was not too outgoing in high school. She has friends but none of them really come from a farm life like she has. “I liked Latino Club. I was in that for three years. I really liked helping out, but we never went on any trips.”

In May, she went on her own to visit her parents’ hometown in the state of Michoacán for two weeks. “I saw relatives I’d never met. All the family. There are barely any here (in the U.S.). My cousins are very young and I was the only girl. Lots of boys.”

Now she hopes to travel far and wide. “I want to travel the world, make a difference, especially in small communities.” But first Gabby plans to finish her bachelors at the University of the Pacific, and then pursue her dream of a doctorate in psychology.

I work in the field of homelessness, with interest in civil rights, sustainability resilience.
View all posts by shocpaula →
This entry was posted in Uncategorized. Bookmark the permalink.