Volunteers at Loaves and Fishes come in many forms. Bobby is a long-term, full-time volunteer who has been working at Friendship Park facilities for almost a year. After he finished college back east, he decided he wanted to follow in his family’s footsteps and volunteer for a year. He, like his father and siblings before him, has become part of Jesuit Volunteers, a program that enlists young people to provide direct service in communities around the world.

Jesuit Volunteers serve people who are poor and marginalized through work at schools, non-profits and other sites. The program is built around the four Catholic Ignatian values of spiritual growth, simple living, communing with other Junior Volunteers and those they serve, and the pursuit of social justice. 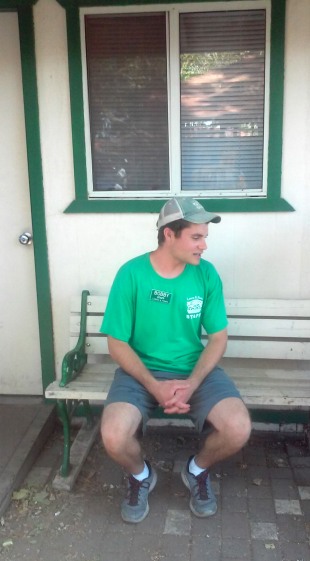 overnight shelter for chronically mentally ill women and a warehouse that secures and stores perishable and non-perishable food.

Close by, and affiliated with Loaves and Fishes are various programs, from Clean and Sober which sponsors AA and NA meetings six days a week, to Family Promise, the headquarters for a network of local congregations that offer overnight shelter for homeless families. An office in the complex helps homeless people with applications and representation for disability certification at hearings and another—Tommy Klinkenbeard Legal Clinic—donates free legal services for homeless people who are accused of infractions and misdemeanors.

Bobby arrived last August and says his time with Loaves and Fishes has been a great experience. He has done a little of everything, from handing out meal tickets to working on computers. He usually assists with coffee service in the mornings. (According to 2007 statistics, Loaves and Fishes served 307,278 cups of coffee. The figure has to be much higher now and they are about to implement a healthful breakfast program as well.) Bobby is getting ready to work at the service center in the early afternoon, something he does almost every day. He is in charge of helping with men’s hygiene—seeing to it that they have shampoo, deodorant, soap, toothpaste, tissues, bug wipes, shoelaces and Q-Tips, to mention a few. “Whatever they need,” he says. “Stuff we all take for granted.”

While he is there to help people meet survival needs, he has enjoyed the camaraderie with them too. In the course of his duties, he has gotten to know a lot of people who come around regularly, and some who have only availed themselves of Loaves and Fishes’ services fleetingly. “I hang out with people. I try to direct them the right way when they tell me what they need. I listen to people. Sometimes you just need to be an ear for them.”

As if to prove the rapport he has had with folks, a man named Jose comes up to him and shakes his hand. They talk a bit, part English, and part Spanish—like old friends greeting one another for the day. “I listen to all the people,” Bobby says. “They tell me about growing up here, or where they have come from. Everyone has a unique story.”

The native of Scranton, PA, is due to start an internship with a Philadelphia media company when he returns back east. “I’ll be sorry to leave. I have never seen anything like this organization before. It is incredible what they do on a daily basis. There needs to be more awareness so people can relate to homeless people. I mean, we all have sort of similar basic human needs.”

He learned about Jesuit Volunteers through a school in Philadelphia. His father was a volunteer in 1979 and 1980. His sister worked as a volunteer with homeless people in Washington, D.C., in 2009. Another teaches at a charter school in New Jersey. “I chose the West Coast,” he says. “I live with other volunteers on 12th Street. It’s a great location and everyone in the house creates a supportive environment. Yes, it’s going to be hard leaving. It is something I will remember all my life.”

This entry was posted in Uncategorized and tagged Jesuit Volunteers, Loaves and Fishes, Sally Ooms Volunteers. Bookmark the permalink.