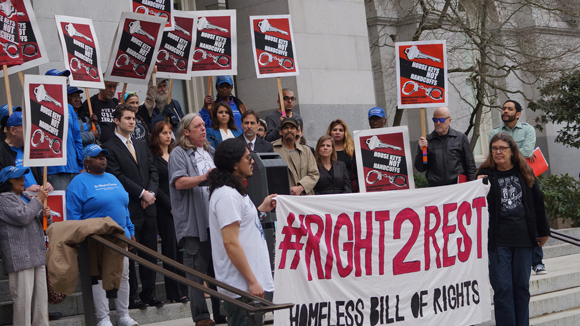 California Homeless , anti-poverty, and civil rights advocacy groups will keep working throughout the rest of the 2015-2016 legislative session to pass a bill aimed at stopping the growing criminalization of people who are homeless.

SB 608, also known as the Right to Rest Act, was held in the State Senate Transportation and Housing Committee when it became apparent that more education and conversation was needed to secure the passage of the bill out of that committee. As a result, it did not meet the April 30 legislative deadline for bills to be voted out of their policy committees. Nevertheless, the bill author, Senator Carol Liu (D-Pasadena), has announced that she will continue to work toward passage of the bill in the second year of the two-year session.

At an April 7 Transportation and Housing Committee hearing, dozens of supporters filled the hearing room to voice their support for an end to laws that make it illegal for homeless individuals to exist in public space. While many senators agreed that criminalization is not the answer, they also voiced their support for more long-term solutions to homelessness. SB 608 supporters agree.

Passing the Right to Rest Act is part of ending homelessness because when we incarcerate people because they are engaged in activities like sitting and sleeping we are exasperating their ability to get out the very situation we are here to solve. Homelessness, said Angel, who has experienced homelessness and being arrested for resting and now is unable to qualify for housing because of the bad credit report she has as a result of the fines linked to those arrests. Angels entire testimony can be viewed at http://bit.do/Right2Rest.

Of course we know that the solutions to homelessness are housing and services, said Paul Boden of the Western Regional Advocacy Project, which coordinates the coalition of 140 organizations across the state that is supporting the Right to Rest Act. But until that happens, we cant continue to punish people simply for being poor and houseless so well continue our fight for the Right to Rest Act. However, there are also a number of bills we are supporting right now that aim to reduce homelessness and build more affordable housing.

So while the Right to Rest Act didnt get passed out of its policy committee this year, supporters are putting their energy behind a number of other bills that they see as complementary to their overall goal: creating housing, ending homelessness and protecting the civil rights of everyone. AB 718 (Chu) aims to stop the enforcement of laws that make it illegal for people to sleep in legally parked vehicles. A package of bills introduced by Assembly Speaker Toni Atkins includes bills that would increase the California Low Income Housing Tax Credit by $300 million, which would provide much-needed funding for affordable housing development, create an ongoing source of funding for affordable-home development and job-creation by increasing the fee on real estate-related document recordings, and use a portion of the Proposition 47 funds to reduce recidivism through investment in rapid rehousing and housing supports for formerly incarcerated Californians.

Homelessness is the graphic representation of our societys unsolved issues: poverty, affordable housing, health care, and mental health. It is time to address the plight of the homeless head-on as a social issuenot a criminal issue, said Senator Liu. Citing homeless people for resting in public space can lead to their rejection for jobs, education loans, and housing, further denying them a pathway out of poverty.
I remain committed to working with all stakeholders on SB 608 to address this increasingly urgent issue.

More information about The Right to Rest Act can be found at:http://bit.do/CARight2RestAct.

I work in the field of homelessness, with interest in civil rights, sustainability resilience.
View all posts by shocpaula →
This entry was posted in Uncategorized. Bookmark the permalink.